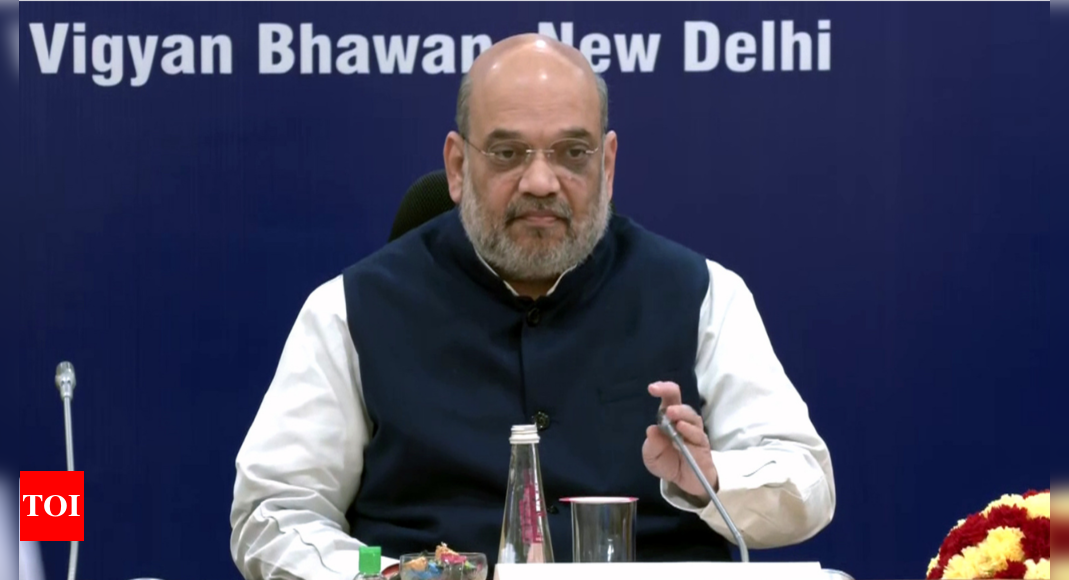 HYDERABAD: Union home minister Amit Shah on Saturday threw down the gauntlet to Telangana CM K Chandrasekhar Rao to announce early assembly elections in Telangana, saying “even tomorrow is fine” as BJP would defeat him anyway. “Please take a pledge to remove the ‘new Nizam’ (KCR),” Shah said at a rally in Tukkuguda near Hyderabad.
Playing on the slogan “Janam gosa-BJP bharosa (people’s cry, BJP’s assurance)”, Shah said the saffron party would win the next election outright. “We will emerge victorious whenever you (KCR) go for the election. Declare the election tomorrow, we are ready for it,” he said.
Most of his 30-minute speech was focused on targeting the CM. “KCR, sitting in his opulent farmhouse, is making plans for an early election in the belief that he can fool the people yet again. But not any more,” he said. Referring to Telangana’s burgeoning loan burden, the Union home minister said, “Why do you want more loans? You need them to feed your (KCR) family.”
He challenged the CM to resign from his post if the promises made to the people could not be fulfilled, saying the promise of water and jobs during the Telangana statehood movement remained unfulfilled. “I have never seen such an inefficient and corrupt government in my entire political career,” he said.
Promising that BJP would buy every kilo of parboiled rice from farmers in the state, Shah said the TRS government was unfairly blaming the Centre for the paddy mess. “Maize, jowar and paddy crops are bought by the state governments. You (TRS government) do not want to buy them and are instead blaming the Modi government.”
He said the Harita Haram programme was unveiled by the Centre and not by the state government. ‘Funds are granted for MGNREGS by the Centre, but the state government misuses them. Similarly, the double bedroom housing scheme is renamed as if it’s a state government scheme. I have given Bandi Sanjay (state BJP chief) a large list of funds given by the Centre and he will soon reveal the list to the people of the state.”
He also lashed out against AIMIM and Muslim reservation. “If the BJP is elected, we will remove Muslim reservation and replace it with ST reservation.” Accusing the AIMIM of “controlling” TRS, he said KCR did not support the nullification of Article 370 and refused to observe Telangana Liberation Day, as had been promised, because “he fears the Majlis party”.