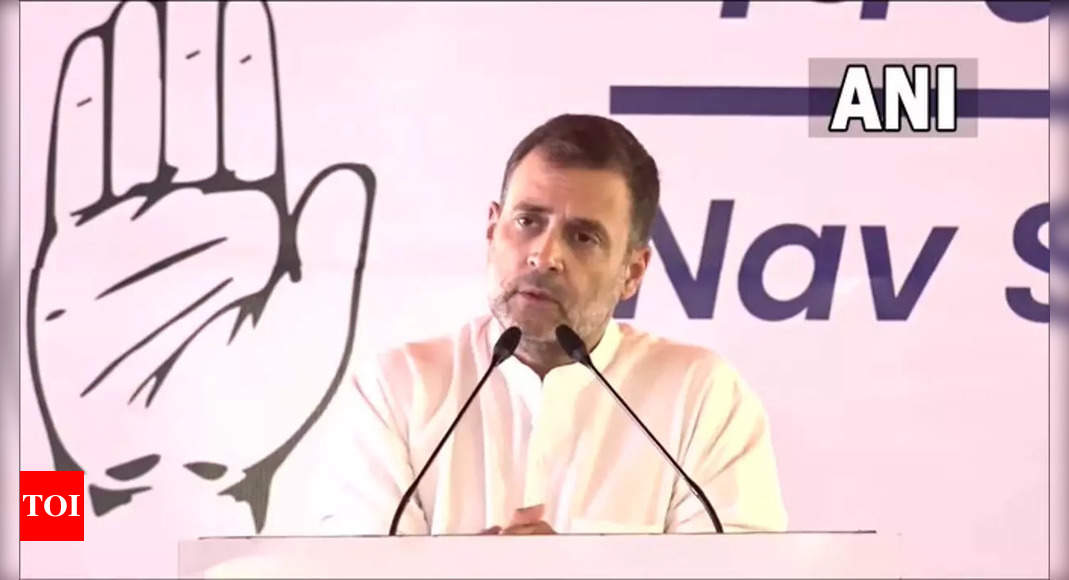 UDAIPUR (RAJASTHAN): Acknowledging that the Congress‘ connection with people has been “broken”, Rahul Gandhi announced on Sunday that the party will undertake a yatra in October to re-establish and strengthen it.
He also laid emphasis on the “one family, one ticket” rule to ensure that multiple members of one family do not contest polls without working for the party.
The Congress on Sunday adopted a ‘Nav Sankalp’ — a road map for wide-ranging reforms in the party organisation to make it battle-ready for the next round of assembly and Lok Sabha polls.
The party has adopted the ‘one-family, one ticket’ formula with the rider that another family member seeking to contest elections should have worked in the party in an exemplary manner for at least five years.
Addressing the closing session of the party’s three-day ‘Nav Sankalp Chintan Shivir‘ here, Gandhi said, “We have to accept that the Congress’ connection with the people has been broken.”
“Our fight is for ideology. We have to go to the people and sit with them, the connection the party had with people has to be re-established,” he said.
“We have decided that the Congress party in October will got to people and take out a yatra and strengthen the relation…with people. This cannot happen with short-cuts,” he said.
Hailing the frank discussions at the Shivir, Gandhi said which other political party would allow this kind of a discussion where the party leadership is bluntly told what the Congress party feels.
“Certainly, the BJP, and RSS would never allow such a thing,” he said.
The Congress has always provided a platform where people can hold deliberations without any fear or worry, he said.
Asserting that India is a Union of States, Gandhi said, “It is critical for the union of the country that the states and the people are allowed to have a conversation. The only alternative to a conversation between the people of India is violence between people of India,” he said.
He alleged a “systematic destruction” of various institutions was taking place.
“The day this country’s institutions stop working, the day this country stops having a conversation with itself, we will be in serious trouble,” he said.
He said there is fear that the country’s demographic dividend will turn into a demographic disaster and alleged that the BJP government was responsible for it.