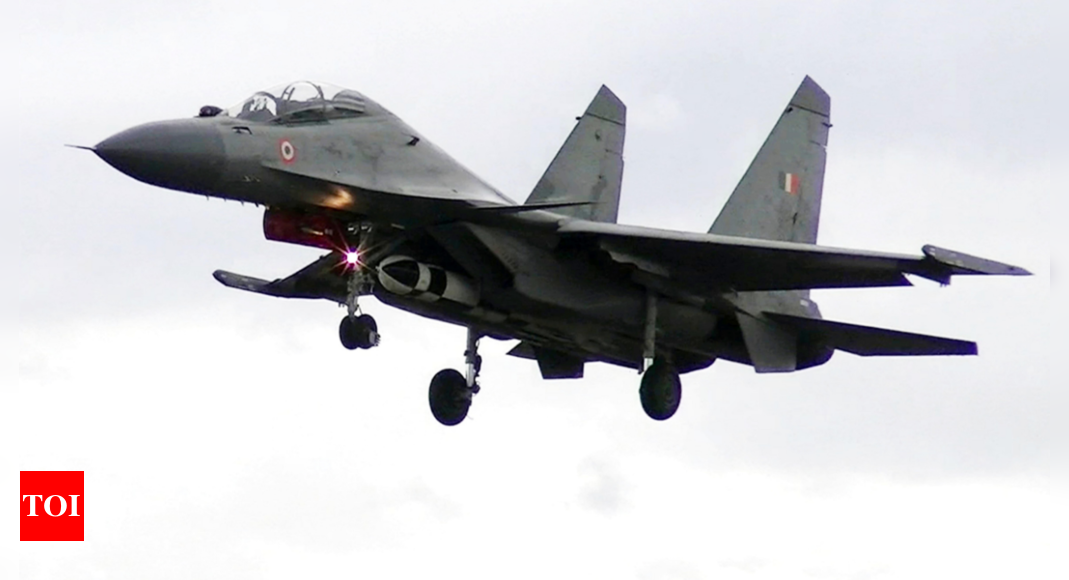 NEW DELHI: In a demonstration of deadly precision strike capability from long standoff distances, India on Thursday successfully tested the extended range BrahMos supersonic cruise missile from a Sukhoi-30MKI fighter jet in the Bay of Bengal.
“This is the first time the new BrahMos missile with a strike range of over 450 km (original range 290 km) has been tested from the air. The Sukhoi, with a combat radius of almost 1,500-km without mid-air refueling, combined with the 450-km range BrahMos missile is a formidable weapons package,” a senior defence official told TOI.
“The lethal Sukhoi-BrahMos combination gives the IAF strategic reach and punch against land or sea targets over very long ranges,” he added. These air-to-ground BrahMos missiles can carry out pinpoint strikes on high-value military targets, underground nuclear bunkers, command-and-control centres on land or aircraft carriers and other warships on the high seas.
A 800-km range variant of BrahMos, which is a conventional (non-nuclear) missile that flies almost three times the speed of sound at Mach 2.8, is also undergoing “developmental trials” at present. Tested for the first time from the interim test range at Balasore in January, this missile variant will be ready for production towards end-2023.
The air-breathing BrahMos has emerged as the “prime conventional strike weapon” for the armed forces over the years, with contracts worth over Rs 36,000 crore already inked till now. The Army’s BrahMos missile batteries, for instance, have been deployed in Ladakh and Arunachal Pradesh as part of the overall military readiness posture against China.
In the test on Thursday, the Sukhoi from the “Tiger Sharks” squadron took off from the Thanjavur airbase in Tamil Nadu, underwent mid-air refuelling and then fired the missile at the “designated target” in the Bay of Bengal. “It was a direct hit,” another official said.
Of the 262 twin-seat “air dominance” Sukhois in IAF, which were contracted from Russia for over $12 billion, 42 fighters are being armed with the 2.5-tonne BrahMos missiles after the requisite structural, electrical, mechanical and software modifications at defence PSU Hindustan Aeronautics. The land and sea missile variants weigh around 3-tonne each.
With India joining the 34-nation Missile Technology Control Regime (MTCR) in June 2016, the “caps” on the original 290-km range of the BrahMos missiles developed jointly with Russia have been removed. The MTCR basically prevents the proliferation of missiles and drones over the range of 300-km.