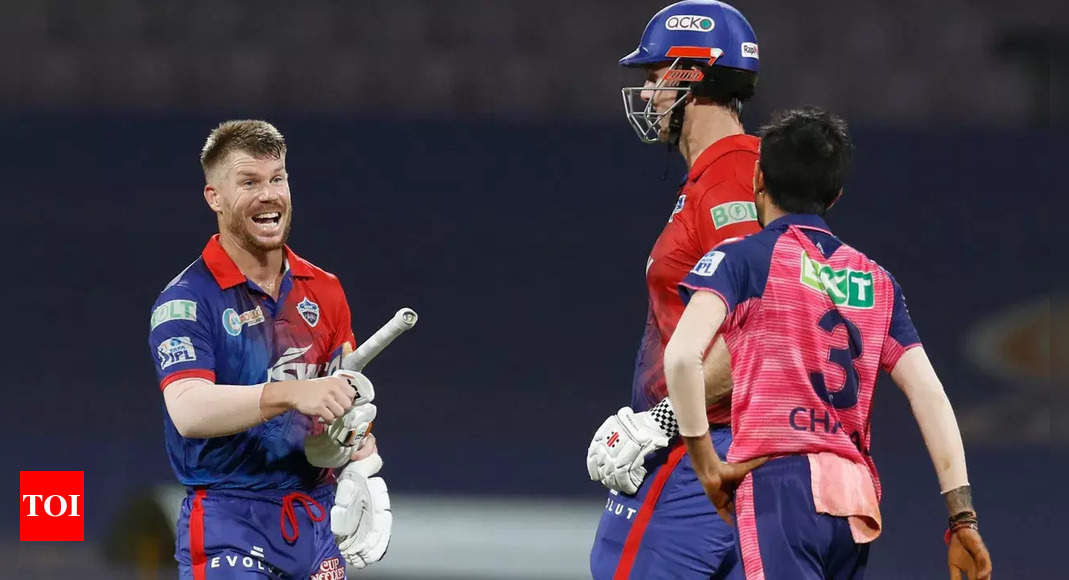 NAVI MUMBAI: Former India batter Sanjay Manjrekar has called for getting rid of “completely redundant” bails in modern-day cricket after an incident featuring Yuzvendra Chahal and David Warner in Wednesday’s IPL 2022 match between Delhi Capitals and Rajasthan Royals at DY Patil Stadium.
In the ninth over of Delhi’s successful chase of 161, Warner had a huge slice of luck when on the last ball of the over, a leg break from Chahal went past his bat and brushed the leg stump. It was sufficient to light the stumps but not enough to dislodge one of the bails, which is a requirement for a clean bowled dismissal.
Eventually, Warner was unbeaten at 52 and with Mitchell Marsh leading the chase with a 62-ball 89, Delhi got a much-needed win by eight wickets.
“I’ve said this before as well, it’s redundant now with the LED stumps to have the bails on. Today it would’ve been a wicket deserving for Chahal who bowled superbly. It was a terrible shot from Warner, and it didn’t get a wicket. Unless it’s adding an aesthetic value, they should just get rid of the bails because they’re completely redundant with LED technology,” said Manjrekar on ESPNcricinfo’s T20 Time: Out show.

(Video grab)
Manjrekar further called for bails to be removed for the game to be in sync with technology. “(The bails were used) just to be sure the ball has hit the stumps they had these bails on top, because if the ball just kissed the stumps you won’t know if there weren’t any bails. And the bails were meant to fall off if the stumps were disturbed. But now that you have a sensor, you know the ball has hit the stumps, so why are the bails there?”
Further explaining the problem with bails, Manjrekar said, “If you have the technology, don’t have the bails. The other problem with bails is, when there is stumping, you wait for it to light up and then you’re talking about whether both the bails are off the grooves and there’s just a lot of complication when you’re judging stumped or run out. Just keep it simple.”
“I know it won’t happen because we don’t like to change too many things. We tweak a few other rules, but certain very obvious things aren’t done. Getting rid of bails may sound scandalous to a lot of people but it defies common sense.”