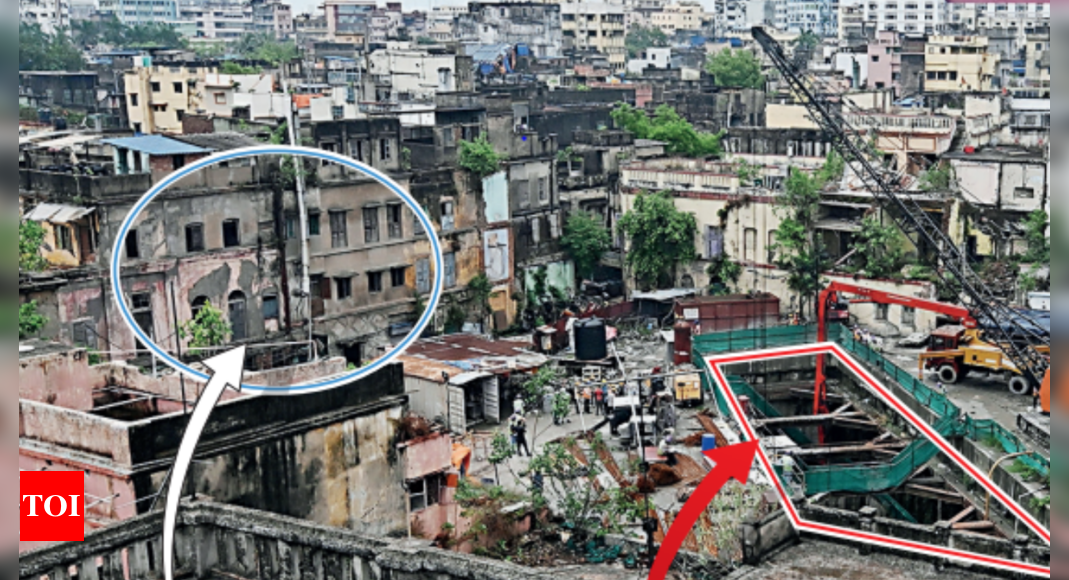 KOLKATA: Late on Wednesday evening, dramatic scenes unfolded in Bowabazar’s Durga Pithuri Lane and later in three central Kolkata hotels as 22 families had to be evacuated from 11pm onwards because cracks appeared in nine buildings next to the site where the retrieval shaft has been built to pull out the tunnel borers that had dug the last leg of the East-West Metro corridor.
The evacuation went on through the night and continued till Thursday afternoon. Around 70 were shifted out in the night itself.

It is a rerun of August 31, 2019, feared the residents, some of whom were being displaced for the second time in 31 months. They rushed out, prodded by policemen announcing warnings of building collapse over loudhailers and microphones. Some could not even change from their night clothes or even have their dinner.
Some, especially the elderly, were crying profusely in panic that their houses might collapse like some did on the fateful night of August 31-September 1, 2019. They picked up whatever they could lay their hands on — Aadhaar card, ration card, voter IDs and ran out of their homes as engineers in safety gear entered buildings to inspect the cracks, some of which were deep and vertical, measuring several inches.
“We are being rendered homeless again and again,” said Sandeep Shaw, whose six-member family is housed in a hotel on Creek Row.
In 2019, around 350 families were shifted to different central Kolkata hotels after nearly 80 buildings developed cracks during the ongoing EastWest Metro tunnelling work. The 87 displaced residents are living in three hotels in central Kolkata. These hotels had housed the evacuees for three, six and even eight months back in 2019. Several of them, consisting of 72 families, were later shifted out of the hotels to rented flats.
When the evacuated families reached the hotels, kitchens had already shut, most of the staff had left and most rooms were occupied but the management of the three hotels where the two evacuated families were taken, made arrangements on “humanitarian ground”. “All of them have been provided air conditioned accommodation,” said Sandeep Sehgal, owner of a C R Avenue hotel, where around 20 people have been shifted.
At the Creek Row Hotel, 30 evacuated people are staying in 10 rooms. “Initially, 42 people were brought by Metro officials at 1. 30 am but we did not have so many rooms. Thirty people were accom- modated in 10 rooms,” said an official of the hotel. While some of the residents have the hotels as their addresses, 52 jewellery units housed in 17 and 19 Durga Pithuri Lane have now shut down because of Wednesday’s subsidence as the buildings have been declared unsafe for occupation. Around 250 workers, all daily wagers, of these units have been rendered jobless.