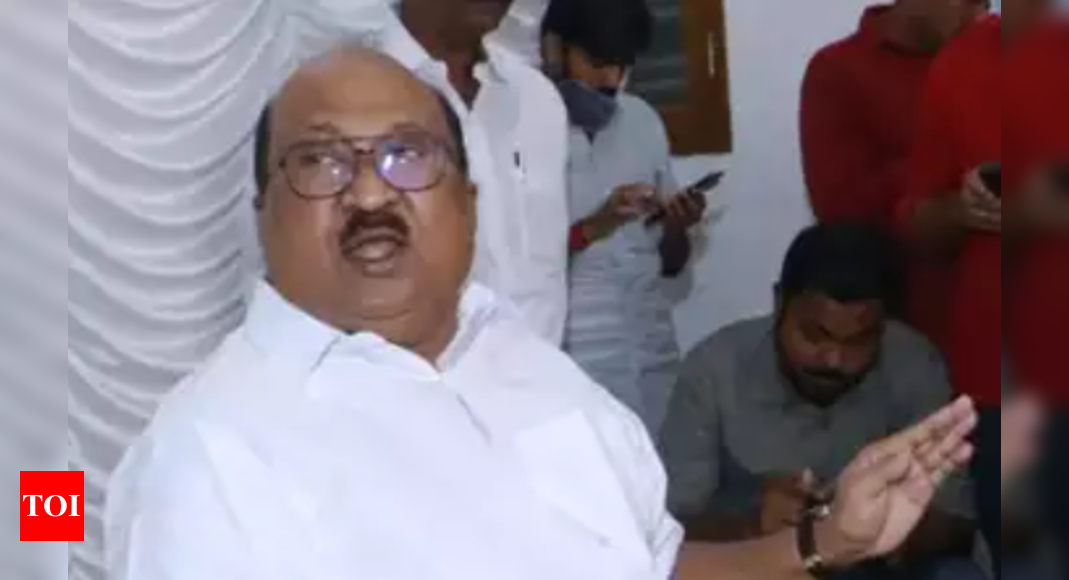 KOCHI: The Congress has finally shown the door to veteran Congress leader K.V.Thomas, bringing an end to his nearlly three-decade stint with the party with several partrymen calling him the modern day ‘Judas’.
Late on Thursday night, State Congress president K.Sudhakaran issued a letter announcing the party’s decision.
Seventy-six-year-old Thomas’s days in the grand-old-party was numbered ever since he was officially removed from key party posts after he attended the CPI-M’s 23rd party Congress in Kannur on April 10, defying AICC president Sonia Gandhi.
The final nail in the coffin was when he attended the first election rally of the CPI-M-led Left at the Thrikkakara bypoll held last evening at Kochi and he heaped praises on Chief Minister Pinarayi Vijayan.
Several leaders in the party who have been long-time colleagues of Thomas described him as the “modern day Judas”. Thomas responded by saying: “Since M.M.Hassan (Congress veteran and convenor of the Congress-led UDF) is not aware of who Judas was, called me that.”
Thomas, while being a Chemistry professor at the SH College Thevara, here was hand-picked by Congress veteran K.Karunakaran to contest the 1984 Lok Sabha polls from Ernakulam. In what can be termed as a “glittering” political career, he contested eight elections for the party from the city.
The only polls he has lost is the 1996 Lok Sabha election. That Karunakaran’s was his God father in politics became very evident when, the factional feud between Karunakaran and A.K.Antony was at its peak, he used the Christian card to keep Oommen Chandy – the closest Antony loyalist – out of Antony’s cabinet in 2001 and brought in Thomas.
Thomas won five terms to the Lok Sabha and twice to the Kerala Assembly and was a cabinet minister in the Antony cabinet and also a Union Minister in the second UPA government.
Soon after his “forced” exit, another leader and daughter of K. Karunakaran, Padmaja Venugopal in a facebook post, said: “I don’t have anything to say.”
“But, the only thing I feel sad about is that he did it at a time when the party was facing a crucial election (Thrikkakara by election). But then, knowing him very closely for long, I am least surprised by what he has done. When my father (Karunakaran) was going through a rough phase, he didn’t even visit him once. What can you expect from a person like him?
“One thing I can say with conviction is, I have been living in this constituency for the past three decades, I know the minds of the electorate here and they are with the Congress- led UDF,” she added.
Now that Thomas is officially out of the Congress, all will have to wait for a while till the votes are counted at the Thrikkakara by-election on July 3 and definitely Thomas position in the Left Democratic Front will consolidated if the CPI-M candidate – an interventional cardiologist Joe Joseph wins, but if Uma Thomas, the widow of two-time Thrikkakara legislator P.T.Thomas who passed away in December last year, wins, the Congress party will have the last laugh.
On Friday morning, when the media caught up with Thomas to get his comments on his ouster, he said the ouster statement of Sudhakaran is a joke.
“The ouster has to come from the AICC and all they can do is to remove me from the primary membership, but none can remove the Congress culture in me which I hold close to my heart. Am not going to join the Left Democratic Front either,” Thomas asserted.