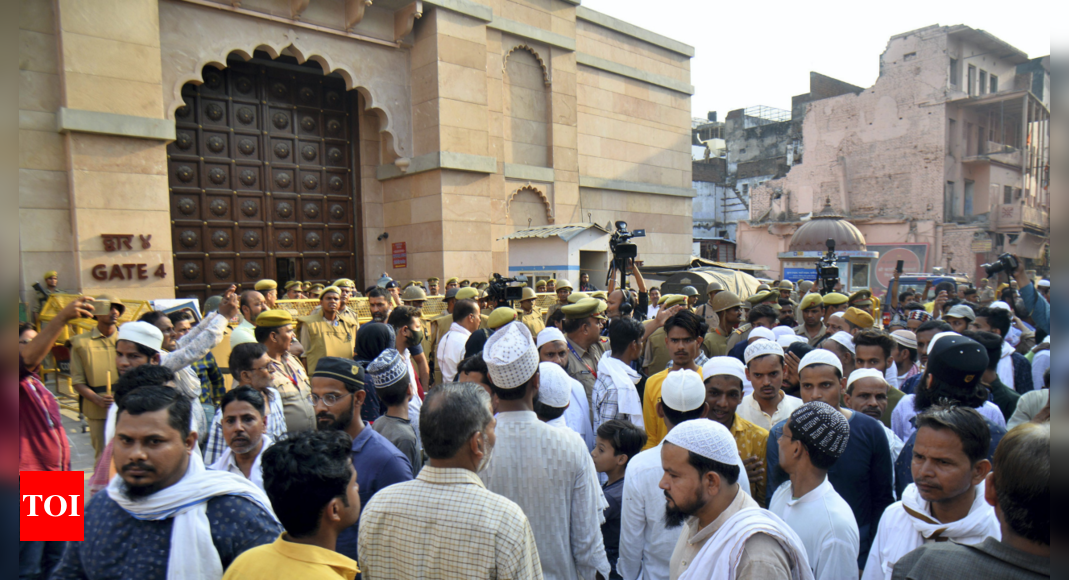 VARANASI: A Varanasi court on Thursday fixed May 17 as the deadline to wrap up the Gyanvapi mosque survey while rejecting the Anjuman Intezamia Masjid Committee‘s plea to replace the advocate commissioner appointed to oversee the exercise at the disputed site.
The court of the Varanasi civil judge (senior division) Ravi Kumar Diwakar had ordered the survey in response to a petition filed by five women seeking the right to unhindered daily worship of the Shringar Gauri deity on the outer wall of the Kashi Vishwanath-Gyanvapi mosque complex.
Asking Ajay Kumar Mishra to continue as advocate commissioner, the court appointed two additional advocates to assist him – Vishal Singh as special advocate commissioner and Ajay Pratap Singh as assistant advocate commissioner – and directed the district administration to ensure the survey wasn’t delayed further for any reason. Anyone who tries to stall the survey should be dealt with sternly, the court said.
The survey started on May 6 in the presence of both parties. The exercise stalled a day later amid a protest by the masjid committee, one of the respondents in the case. The committee simultaneously filed a petition in the court, accusing advocate commissioner Mishra of working under pressure from the plaintiffs and requesting that he be replaced.
The court noted that the plaintiffs had filed a 41-page petition with details that could be understood by a layperson. “The plaintiffs have clearly requested that the survey be done according to the details given in the petition. It is beyond comprehension of the court why the district administration failed to understand such clear language. The survey of the commission could have been completed if the district administration had taken interest,” it said.
Meanwhile, Ajay Kumar Mishra said he and his family feared for their safety in the face of attempts to get him replaced. “An atmosphere of fear has been created in an ordinary civil case,” he told the court.
‘Truth will come out’ :
Hailing a Varanasi court’s direction for completion of a video survey of the Gyanvapi mosque premises by May 17, the Vishva Hindu Parishad (VHP) on Thursday said that the “truth” will soon come out and urged the mosque management committee to “cooperate” in the implementation of the court’s direction.