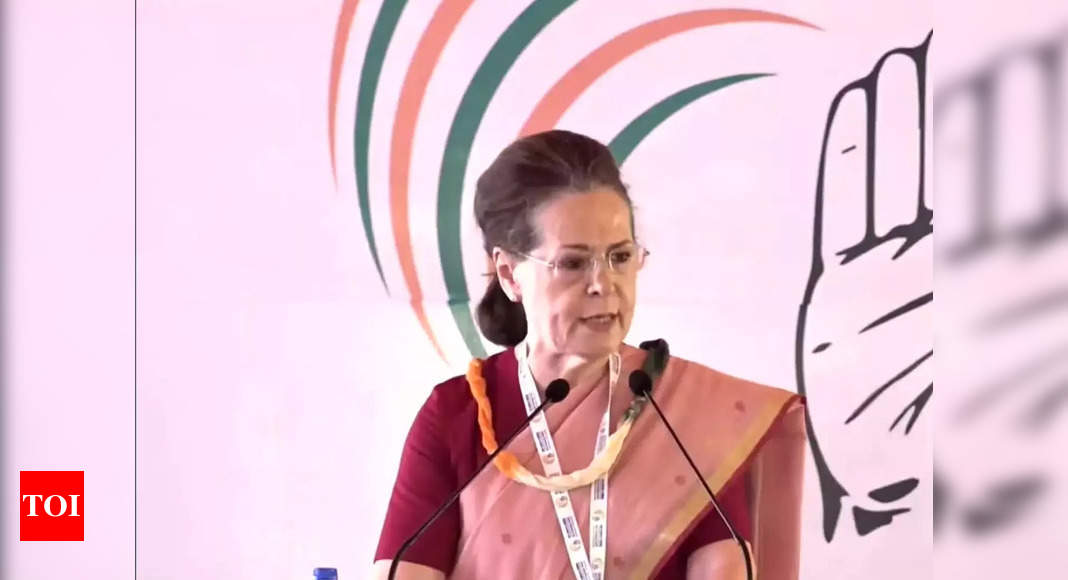 NEW DELHI: The Congress on Sunday announced wide-ranging organisational reforms to make the party battle-ready for the next round of assembly and Lok Sabha polls, stressing on wider representation to those under 50 years of age and enforcing ‘one person, one post’ and ‘one family, one ticket’ rules with riders.
In its Udaipur Declaration adopted after deliberations at the ‘Nav Sankalp Chintan Shivir‘, the Congress also decided to set up three new departments — public insight, election management and national training.
In her concluding address, Congress president Sonia Gandhi said the party will launch a ‘Bharat Jodo Yatra‘ from Kanyakumari to Kashmir beginning on Mahatma Gandhi Jayanti on October 2. The party will also launch the second phase of its ‘Jan Jagran Yatra’ at the district level from June 15.
Here is the full text of Sonia Gandhi’s speech:
We have come to the end of this Chintan Shivir. On your behalf and on my own, I want to thank Ashok Gehlot-ji, Govind Singh Dotasraji and all their colleagues for hosting us here and making such excellent arrangements.
I feel it has been a very useful and productive Shivir. So many of you have had an opportunity to express your views and offer your suggestions in a spirit of constructive participation. I have received a summary of discussions in each of the six groups. They will inform our party positions, policies and programmes. They will also be of value to prepare manifestos for state and national elections. I want to make a special mention of the report of the organizational group since it is the most immediately relevant. Some of its ideas have formed part of the Udaipur NavSankalp Declaration that has just been adopted. I assure you that the detailed recommendations of the group will be acted upon expeditiously.
We will undoubtedly leave re-energised with a refreshed spirit of collective purpose. Before we do that let me make the following four specific announcements in addition to the NavSankalp that has been adopted.
1. We will launch a national Kanyakumari to Kashmir Bharat Jodo Yatra beginning on Gandhi Jayanti this year. All of us will participate in it. The Yatra is to strengthen the bonds of social harmony that are under stress, to preserve the foundational values of our Constitution that are under assault and to highlight the day-to-day concerns of crores of our people.
2. Meanwhile, phase-2 of the district-level Jan Jagran Abhiyan that had been launched earlier will resume a month later on the 15th of June. This extensive campaign will highlight economic issues especially the growing unemployment and intolerable price rise that is destroying livelihoods.
3. A compact Task Force will be set up to drive the process of internal reforms that are essential and that has been discussed in different groups here at Udaipur. These reforms with focus on the 2024 Lok Sabha polls will cover all aspects of the organization including structure, rules for appointments to party posts, communications and publicity, outreach, finances and election management. The composition of the Task Force will be notified in the next two-three days.
4. I have also decided to have an advisory group drawn from the CWC that would meet regularly under my chairpersonship to discuss and deliberate upon political issues and challenges before our party. Of course, we do have the CWC that meets from time to time and that will continue. The new group is not, however, a collective decision-making body but will help me get the benefit of the vast experience of senior colleagues. It too will be notified very soon.
Throughout these three days, you have also had the opportunity to get to know each other, to meet and interact with your senior and younger colleagues. As for myself, I was able to sit through all the six groups and listen to some of the speakers.
Now on a personal note. Last night, I came away from the dinner so graciously hosted by Ashok Gehlot-ji, feeling that I had spent the evening with my family. I was touched when some of the younger guests shared the same view. I hope that this is the spirit in which we will disperse this evening.
So, my friends and colleagues, let me wish you all the very best. We WILL overcome. That is our determination. That is our NavSankalp. The Congress WILL have a new Uday. That is our NavSankalp.