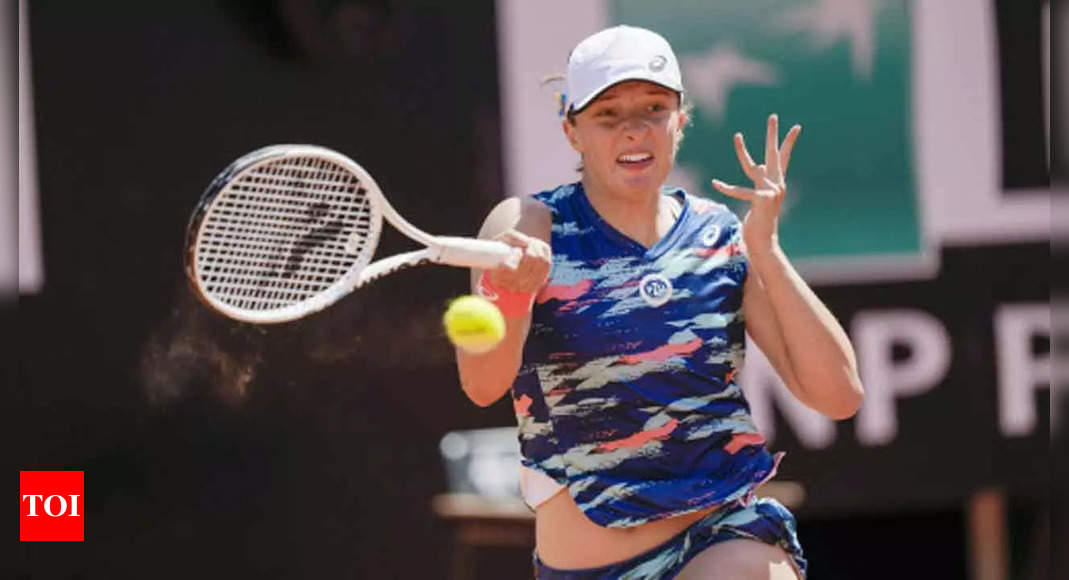 ROME: Iga Swiatek continued her hot streak on Thursday by seeing off Victoria Azarenka 6-4, 6-1 to move into the Italian Open quarter-finals.
World number one Swiatek needed nearly two hours to claim her 25th straight victory as the 20-year-old bids for a fifth tournament win in a row.
Swiatek is the favourite for the French Open which starts later this month and showed why in an impressive performance against Azarenka, herself a former top-ranked player and Grand Slam winner.
Azarenka got off to a blistering start at the Foro Italico, the two-time Australian Open winner claiming the first three games and breaking Swiatek twice in the process.
However Swiatek replied by winning three games of her own before taking game seven on her serve, surviving three break points in a long battle at deuce.
She then quickly broke, lost her serve in a 14-point battle in which she missed four set points, and then broke again in game 10 to finally win the set.
Azarenka broke again at the start of the second set but that was as good as it good from there on in for the Belarusian as Swiatek then rattled off six games on the bounce to set up a clash with Bianca Andreescu.
Alexander Zverev and Stefanos Tsitsipas could face off in the semi-finals of the men’s tournament after both making it through to the quarter-finals.
World number three Zverev saw off Alex de Minaur 6-3, 7-6 (7/5) in the early match on centre court to set up a last-eight clash with either Cristian Garin or Marin Cilic.
The German was unruffled in his victory over Australian De Minaur as he looks to bounce back from being trounced by teenage phenomenon Carlos Alcaraz in the Madrid final on Sunday.
Zverev had complained about always playing late into the night in Spain and has been allocated two morning matches in the Italian capital.
“I prefer to play at 11am (0900 GMT) rather than 1am (2300 GMT). I think every player would say that. Something in between would also be nice I think,” Zverev told reporters.
Tsitsipas meanwhile was forced to work harder for his 4-6, 6-0, 6-3 win over former Paris Masters winner Karen Khachanov.
Russian Khachanov, whose best results have all come on hard court, deservedly took the first set against sluggish world number five Tsitsipas.
The Greek, who is a contender in Rome after winning this year’s Monte Carlo Masters, bounced back in the second set and once he broke in game two of set three Khachanov’s fate was sealed.
In the last eight Tsitsipas will take on either Filip Krajinovic or local hero Jannik Sinner, the only Italian left in the men’s tournament after he saw off countryman Fabio Fognini on Wednesday.
“I think loosening up a little bit and trying to concentrate a bit more on that gave me the win today,” Tsitsipas said.
“It hasn’t been easy the last two matches but I can only take the good side.”